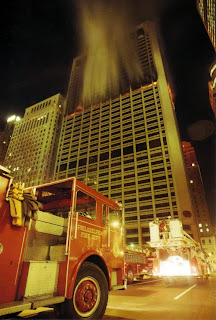 Ceremonies took place on Wednesday October 21 in Philadelphia, PA unvieling a memorial honoring PFD Fire Capt. David P. Holcombe, Firefighter Phyllis McAllister and Firefighter James A. Chappell who died in the line of duty while conducting operations at a high-rise fire in what is known as the One Meridian Plaza Fire which occurred on February 23, 1991.

A fire on the 22nd floor of the 38-story Meridian Bank Building, also known as One Meridian Plaza, was reported to the Philadelphia Fire Department on February 23, 1991 at approximately 2040 hours and burned for more than 19 hours.

· The fire caused three firefighter fatalities (LODD) and injuries to 24 firefighters.
· The 12-alarms brought 51 engine companies, 15 ladder companies, 11 specialized units, and over 300 firefighters to the scene.
· It was one of the largest high-rise office building fire in modern American history –completely consuming eight floors of the building –and was controlled only when it reached a floor that was protected by automatic sprinklers.
· The Fire Department arrived to find a well-developed fire on the 22nd floor, with fire dropping down to the 21st floor through a set of convenience stairs.
· Heavy smoke had already entered the stairways and the floors immediately above the 22nd.
· Fire attack was hampered by a complete failure of the building’s electrical system and by inadequate water pressure, caused in part by improperly set pressure reducing valves on standpipe hose outlets.

The USFA published a technical report (USFA-TR-049) on the One Meridian Plaza fire that is still available for download from the USFA web site, HERE. The report clearly defined the need in 1991, for built-in fire protection systems and reiterated the fact that fire departments alone cannot expect or be expected to provide the level of fire protection that modem high-rises demand. That fire protection must be built-in to the structures. This was clearly illustrated in this event when the One Meridian Plaza fire was finally stopped when it reached a floor where automatic sprinklers had been installed.

One Meridian Plaza was a 38-story high-rise office building, located in the heart of downtown Philadelphia, in an area of high-rise and mid-rise structures. The building had three underground levels, 36 above ground occupiable floors, two mechanical floors (12 and 38), and two rooftop helipads. The building was rectangular in shape, approximately 243 feet in length by 92 feet in width (approximately 22,400 gross square feet), with roughly 17,000 net usable square feet per floor. Site work for construction began in 1968, and the building was completed and approved for occupancy in 1973.

The building frame was structural steel with concrete floors poured over metal decks. All structural steel and floor assemblies were protected with spray-on fireproofing material. The exterior of the building was covered by granite curtain wall panels with glass windows attached to the perimeter floor girders and spandrels. The building utilized a central core design, although one side of the core is adjacent to the south exterior wall. The core area was approximately 38 feet wide by 124 feet long and contained two stairways, four banks of elevators, two HVAC supply duct shafts, bathroom utility chases, and telephone and electrical risers.

SUMMARY OF KEY ISSUES
· Origin and Cause: The fire started in a vacant 22nd floor office in a pile of linseed oil-soaked rags left by a contractor. Fire Alarm System The activation of a smoke detector on the 22nd floor was the first notice of a possible fire. Due to incomplete detector coverage, the fire was already well advanced before the detector was activated.
· Building Staff Response Building employees did not call the fire department when the alarm was activated. An employee investigating the alarm was trapped when the elevator opened on the fire floor and was rescued when personnel on the ground level activated the manual recall. The Fire Department was not called until the employee had been rescued.
· Alarm Monitoring Service The private service which monitors the fire alarm system did not call the Fire Department when the alarm was first activated. A call was made to the building to verify that they were aware of the alarm. The building personnel were already checking the alarm at that time.
· Electrical Systems Installation of the primary and secondary electrical power risers in a common unprotected enclosure resulted in a complete power failure when the fire-damaged conductors shorted to ground. The natural gas powered emergency generator also failed.
· Fire Barriers Unprotected penetrations in fire-resistance rated assemblies and the absence of fire dampers in ventilation shafts permitted fire and smoke to spread vertically and horizontally.
· Ventilation openings in the stairway enclosures permitted smoke to migrate into the stairways, complicating firefighting.
· Unprotected openings in the enclosure walls of 22nd floor electrical closet permitted the fire to impinge on the primary and secondary electrical power risers.
· Standpipe System and Pressure Reducing Valves (PRVs): Improperly installed standpipe valves provided inadequate pressure for fire department hose streams using 1 3/ 4-inch hose and automatic fog nozzles. Pressure reducing valves were installed to limit standpipe outlet discharge pressures to safe levels. The PRVs were set too low to produce effective hose streams; tools and expertise to adjust the valve settings did not become available until too late.
· Locked Stairway Doors: For security reasons, stairway doors were locked to prevent reentry except on designated floors. (A building code variance had been granted to approve this arrangement.) This compelled firefighters to use forcible entry tactics to gain access from stairways to floor areas.
· Fire Department Pre-Fire Planning: Only limited pre-fire plan information was available to the Incident Commander. Building owners provided detailed plans as the fire progressed. · Firefighter Fatalities: Three firefighters from Engine Company 11 died on the 28th floor when they became disoriented and ran out of air in their SCBAs.
· Exterior Fire Spread: “Autoexposure” Exterior vertical fire spread resulted when exterior windows failed. This was a primary means of fire spread.
· Structural Failures: Fire-resistance rated construction features, particularly floor-ceiling assemblies and shaft enclosures (including stair shafts), failed when exposed to continuous fire of unusual intensity and duration.
· Int
erior Fire Suppression Abandoned: After more than 11 hours of uncontrolled fire growth and spread, interior firefighting efforts were abandoned due to the risk of structural collapse.
· Automatic Sprinklers: The fire was eventually stopped when it reached the fully sprinklered 30th floor. Ten sprinkler heads activated at different points of fire penetration. · The three firefighters who died were attempting to ventilate the center stair tower: They radioed a request for help stating that they were on the 30th floor. After extensive search and rescue efforts, their bodies were later found on the 28th floor. They had exhausted all of their air supply and could not escape to reach fresh air. At the time of their deaths, the 28th floor was not burning but had an extremely heavy smoke condition.
· After the loss of three personnel, hours of unsuccessful attack on the fire, with several floors simultaneously involved in fire, and a risk of structural collapse, the Incident Commander withdrew all personnel from the building due to the uncontrollable risk factors. The fire ultimately spread up to the 30th floor where it was stopped by ten automatic sprinklers.

Take the time to review this report and examine some of similar issues affecting the fire service today in the areas of staffing and resources, construction and materials, building codes, built-in fire suppression systems, training, pre-fire planning, fire load, fire dynamics and the current methodologies on wind-drive fire theory. Also take a look at the issues that affected operations at the 1988 Interstate Bank Fire in downtown Los Angeles, California.