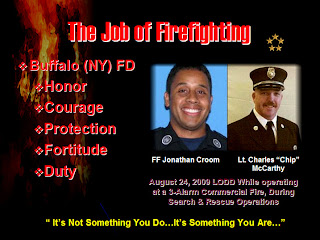 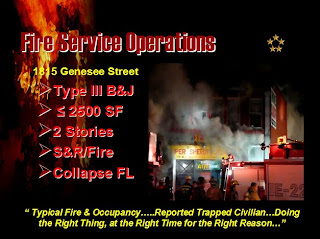 On Monday August 24th, two Buffalo (NY) Firefighters sustained injuries and died in the line-of-duty (LODD) during the conduct of operations at a two-story Type III (brick and joist) commercial occupancy in Buffalo, New York. The 911 call reported someone may be trapped inside the 1815 Genesee Street occupancy just before 4:00 hours. (more HERE and HERE)
Arriving companies reported a working fire in the basement. Lt. Charles “Chip” McCarthy of Rescue Company 1 was conducting search and rescue operations, when the number one floor collapsed, plunging him into the basement. Firefighter Jonathan Croom of Ladder Company 7 entered the building to search for Lt. McCarthy in response to the Mayday call. The mayday was called a little more than a half-hour into the incident. At about 4:09 AM, Command gave the following report:
“Twenty minutes into 1815 Genesee Street. Two-story ordinary. We are now operating three, inch and three quarter lines. We are doing an aggressive interior search. We still have a report of civilians trapped. We believe they may be in the basement. We are going to hold everybody we have including the two and one.”
Command soon asks for the balance of the second alarm. According to published reports and radio communication transcripts, companies reported difficulty getting into a basement door and deteriorating conditions on the number one floor. Genesee Street Command reported at the thirty-minute mark:
“Thirty minutes into 1815 Genesee Street. Still continuing to operate all hands. We will continue to hold the second alarm.” ( MP3 Communications, HERE)
There’s been a lot of talk of recent regarding the fire service cultural divides. We should take a moment to pause and reflect on the job of firefighting in light of the Buffalo LODD’s and refocus and recognize the job of firefighting has inherent risks, and the job requires us to; Do the Right Thing, at the Right Time, for the Right Reasons.
Lt. Chip McCarthy and Firefighter Jonathan Croom were doing the right thing, when deployed on the primary search and rescue assignment on the first-due, and the subsequent search and rescue on the RIT/mayday assignment. Their sacrifice in the line-of-duty, reflects the honor, courage, protection, fortitude and duty of the fire service.
Operations at buildings of Ordinary and Heavy Timber construction require a clear understanding of their inherent structural features and conditions, and a firm knowledge of structural degradation and compromise resulting from fire suppression operations. Firefighter safety and operational integrity is contingent upon knowing how these buildings perform and may be impacted by structure fires within their occupancies. More information and support training materials HERE and HERE. Remember; Building Knowledge = Firefighter Safety.