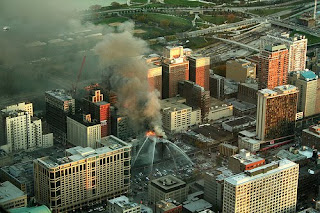 THE MODERN ENVIRONMENT
The built-environments that form and shape our response districts and communities pose unique challenges to the day-to-day responses of fire departments and their subsequent operations during combat structural fire engagement. With the variety of occupancies and building characteristics present, there are definable degrees of risk potential with recognizable strategic and tactical measures that must be taken.

Although each occupancy type presents variables that dictate how a particular incident is handled, most company operations evolve from basic strategic and tactical principles rooted in past performance and operations at similar structures.

This basis is based upon Predictability of Performance.
• Modern building construction is no longer predicable
• Command & company officer technical knowledge may be diminished or deficient
• Technological Advancements in construction and materials have exceeded conventional fire suppression practices
• Some fire suppression tactics are faulted or inappropriate, requiring innovative models and methods.
• Fire Dynamics and Fire Behavior is not considered during fireground size-up and assessment
• Risk Management is either not practiced or willfully ignored during most incident operations
• Some departments or officers show and indifference to safety and risk management
• Command & Company Officer dereliction
• Nothing is going to happen to me (us)

Situation Awareness related to Building Construction, Command Risk Management and Firefighter Safety is another mission critical element. Situation Awareness (SA) is the perception of environmental elements within a volume of time and space, the comprehension of their meaning, and the projection of their status in the near future.

It is also a field of study concerned with perception of the environment critical to decision-makers in complex, dynamic situations and incidents.

Both the 2006 and 2007 Firefighter Near-Miss Reporting System Annual Reports identified a lack of situational awareness as the highest contributing factor to near misses reported.

• Situation Awareness involves being aware of what is happening around you at an incident scene to understand how information, events, and your own actions will impact operational goals and incident objectives, both now and in the near future.

Command and company officers and firefighters MUST understand the building, the occupancy features and the inherent impact of fire within and on the structure, AND be able to identify, communicate and take actions necessary to support the incident action and battle plans, mitigate incident conditions and provide for continuous safety protection to themselves, their team, their company and the entire alarm assignment operating at the incident scene.

If you’re in Dallas this coming week for the IAFC Fire Rescue Conference, I’ll be presenting two programs: Structural Anatomy; Building Construction for the Command and Company Officer and Dynamic Risk Assessment of Occupancies for Combat Engagement. Stop by, or catch me in the street during the week, you can’t miss me. In addition, stop in at the IAFC Safety, Health and Survival Section meeting on Friday August 21 to hear the latest on FF SH&S; issues.