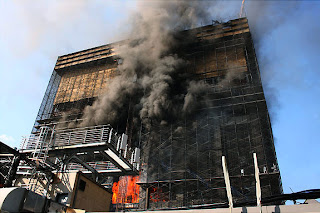 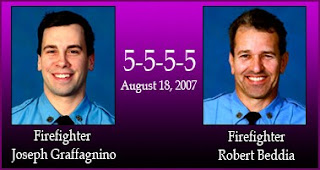 Remembrance: Deutsche Bank Fire and Double FDNY LODD in lower Manhattan, NYC- August 18, 2007
Structural Anatomy; Operational Safety at Deconstruction & Demolition Sites
Fire operations for structures undergoing construction, alterations, deconstruction, demolition and renovations present significant risks and danger to operating personnel. This reality was clearly validated when two FDNY firefighters died in the line-of-duty during a seven-alarm fire that tore through the abandoned Deutsche Bank skyscraper in lower Manhattan, next to ground zero in New York City on Saturday August 18, 2007.The Deutsche Bank Building located at 130 Liberty Street adjacent to the quarters of FDNY Engine 10, Ladder 10, was once a 40-story high-rise structure that had been systematically reduced to 26-stories at the time of the fire. Significant building contamination from numerous toxic substances that included asbestos and lead resulting from the destruction of the World Trade Center during the September 11th attacks required the deliberate floor-by-floor dismantling effort as part of the deconstruction process that would ultimately remove the building from its present site.
The two FDNY firefighter fatalities were Fr. Joseph Graffagnino, an eight year veteran and Fr. Robert Beddia a twenty-three year veteran, both assigned to Engine 24 and Ladder 5 in SoHo. The seven alarm fire was being worked with a contingent of over 275 firefighters when the pair became trapped on the 14th floor of the building after being overcome by blinding concentrations of dense smoke after their air supply was depleted during the course of combat fire suppression operations.
Its these types of unique and dangerous elements confronting incident commanders, company officers and operating forces that demands a clear understanding that fire suppression operations in buildings during construction, alterations, deconstruction, demolition and renovations present significant risks and consequences that require a methodical and conservative approach towards incident stabilization and mitigation.
You cannot implement conventional tactical operations in these structures. Doing so jeopardizes all operating personnel and creates unbalanced risk management profiles that are typically not favorable to the safety and wellbeing of firefighters.
For more information on Operational Safety at Deconstruction & Demolition Sites, go HERE and HERE
Operational Safety at Deconstruction & Demolition Sites Power Point program download, HERE