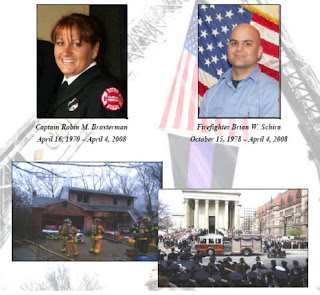 On April 04, 2008, a 37-year-old female career captain and a 29-year-old male part-time fire fighter were fatally injured when a section of floor collapsed and trapped them in the basement during a fire at a residential structure. At 0611 hours, an automatic alarm dispatched the fire department. Dispatch upgraded the alarm to a working structure fire 9 minutes later. At 0623 hours, the victims’ engine was the first to arrive on scene. The homeowner met the engine crew and stated that the fire was in the basement and everyone was out.

The second fire fighter went back up the stairs to pull more hose at the front door. As he returned to the basement stairway, he saw the captain at the top of the stairs, trying to use her radio and telling him to get out. A captain from the second arriving engine noticed the smoke getting black, heavy, and pushing out the front door and requested the incident commander (IC) to evacuate the interior crew.

The second fire fighter exited the structure alone. The IC made several attempts to contact the interior crew with no response. At 0637 hours, the IC sent out a “Mayday.” A rapid intervention team was activated and followed the hoseline through the front door and down to the basement. Returning to the first floor, they noticed a collapsed section of floor and went to investigate the debris in that area of the basement.At 0708 hours, the captain was found near a corner of the basement. At 0729 hours, after removing debris from around the captain, the other fire fighter was located underneath her and some additional debris. Both victims were pronounced dead at the scene.

Take the time to conduct an appropriate 360 degree risk assessement of a structure and perform the necessary structural triage of the occupancy, assess the observations and communications into safe and well define incident action plans (IAP), that also take into account the dynamics of the evolving incident, time considerations and situational
awareness.