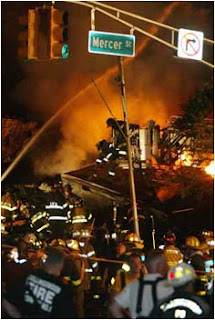 As we approach the July 4th holiday period, two significant LODD incidents previously occurred during this time frame that hold a number of lessons learned related to command management, operations, building construction principles and building performance, fire behavior and the ever present dangers of the job.

Take the opportunity to learn more about these events, and expand your insights and knowledge base. Take a moment to reflect upon the supreme sacrifice made by these heroic firefighters and the messages that lay within the pages of the incident case studies, reports and summaries.

There’s a lot of practical safety and operational information on these events along with a tremendous volume of information in the various text books on strategy and tactics, incident command and building construction.

Learn from the past so we don’t repeat it. Remember- NO MORE HISTORY REPEATING EVENTS!

Twenty-one Year Anniversary Hackensack Ford Fire and Truss roof collapse, Hackensack Fire Department. July 1st, 1988Pause to remember our brothers who made the ultimate sacrifice twenty-one years ago, on July 1st, 1988 and the lessons learned from this event.

On July 1, 1988 Hackensack’s Captain RICHARD L. WILLIAMS, Lieutenant RICHARD REINHAGEN, Firefighter WILLIAM KREJSA, firefighter LEONARD RADUMSKI, and Firefighter STEPHEN ENNIS lost their lives at Hackensack Ford when a bowstring arch truss collapsed entrapping them in the area below. The five firefighters were in the structure, a bowstring truss building, when the roof suddenly collapsed. Williams, Kresja, and Radumski were killed instantly, and Reinhagen and Ennis, despite heroic rescue attempts, succumbed to carbon monoxide poisoning.

Three (3) building factors contributed to the collapse of this bowstring trussed roof:
• Alterations that consisted of a heavy ceiling of cementitious material on wire lathe;
• Auto parts storage in the attic; and
• The Fire burned for a significant length of time and was well advanced prior to detection.
• This roof collapsed 35 Minutes after the initial units arrived.

Five fire fighters from the Hackensack, New Jersey Fire Department were killed while they were engaged in interior fire suppression efforts at an automobile dealership when portions of the building’s wood bowstring truss roof suddenly collapsed. The incident occurred on Friday, July 1, 1988, at approximately 3:00 p.m., when the fire department began to receive the first of a series of telephone calls reporting “flames and smoke” coming from the roof of the Hackensack Ford Dealership.Two engines, a ladder company, and a battalion chief responded to the first alarm assignment. The first arriving fire fighters observed a “heavy smoke condition” at the roof area of the building. Engine company crews investigated the source of the smoke inside the building while the truck company crew assessed conditions on the roof. For the next 20 minutes, the focus of the suppression effort was concentrated on these initial tactics.

During this time, however, little headway appeared to have been made by the initial suppression efforts, and the magnitude of the fire continued to grow. The overall fire ground tactics were shifted to a more “defensive” posture (exterior operation) and the battalion chief gave the order to “back your lines out.” However, before suppression crews could exit form the interior, a sudden partial collapse of the truss roof occurred, trapping six fire fighters. A

n intense fire immediately engulfed the area of the collapse. One trapped fire fighter was able to escape through an opening in the debris. The other five died as a result of the collapse. This incident and several others before and since, provide important lessons to the fire service regarding the fire ground hazards of wood truss roof assemblies.

This NFPA Summary may be reproduced in whole or in part for fire safety educational purposes as long as the meaning of the summary is not altered, credit is given to NFPA and the copyright of the NFPA is protected.

Learn from the past so we don’t repeat it. Remember- NO MORE HISTORY REPEATING EVENTS!

Some Open Questions;
• What impact did the Hackensack Ford Fire & Collapse have upon you in your career?
• Were you aware of this event and its lessons learned prior to this posting?
• What do you feel you need to learn related to Building Construction, Fire Behavior or Strategy and Tactics related to various occupancies and construction types?

On July 4th, 2002 at 0136 hrs.,The Gloucester City Fire Department was dispatched to 200 North Broadway for a reported house fire. Responding units were advised that occupants may be trapped. First arriving units were on location in less than three minutes.They found heavy fire on all exposures of a three-story multi-family dwelling and initiated a search for entrapped occupants. (Various reports from bystanders were at times conflicting regarding the number and location of victims). While providing an aggressive interior attack and rescue operation, an occupant was rescued from the dwelling.

Due to the severity of their injuries they were unable to give direction regarding the whereabouts of any other occupants.Whi
le all hands were operating by continuing an aggressive interior attack and rescue, a partial collapse of the structure occurred. An emergency evacuation signal was sounded and while that was commencing a further and much more substantial collapse occurred trapping eight firefighters inside the burning debris.

Additional specialized collapse rescue resources were requested, firefighter accountability was initiated and rescue efforts were intensified. Five of the eight trapped firefighters were rescued. Three of the eight gave the ultimate sacrifice in service to their fellow man. Unfortunately these three children did not survive. A total of nine victims were transported to area hospitals, one civilian and eight firefighters.

SUMMARY
On July 4, 2002, a 30-year-old male volunteer fire chief, a 40-year-old male volunteer deputy fire chief, and a 30-year-old male career fire fighter died when a residential structure collapsed, trapping them, along with four fire fighters and an officer who survived. At 0136 hours, a combination fire department and a mutual-aid volunteer fire department were dispatched to a structure fire. Local law enforcement radioed Central Dispatch reporting a fully involved structure with three children trapped on the second floor. The first officer on the scene assumed incident command and reported to Central Dispatch that the incident site was a three-story structure with fire showing and that people could be seen at the windows.

Note: The female resident (survivor) was the person seen in the window.The three children that were reported as being trapped did not survive and were later found in the debris. Additional units were requested, including a mutual-aid ladder company from a career department. Crews were on the scene searching for occupants and fighting the fire for approximately 27 minutes when the building collapsed.

NIOSH investigators concluded that, to minimize the risk of similar incidents, fire departments should;
• Ensure that the department’s structural fire fighting standard operating guidelines (SOGs) are followed and refresher training is provided• Ensure that the Incident Commander (IC) formulates and establishes a strategic plan for offensive and defensive operations
• Ensure that the incident commander (IC) continuously evaluates the risk versus gain during operations at an incident
• Ensure that a separate Incident Safety Officer, independent from the Incident Commander, is appointed
• Ensure that fire fighters conducting interior operations (e.g., search and rescue, initial attack, etc.) provide progress reports to the IC
• Ensure that accountability for all personnel at the fire scene is maintained
• Ensure that a Rapid Intervention Team (RIT) is established and in position
• Ensure that the officer in charge of an incident recognize factors (e.g., structural defects, large body of fire in an old structure, etc.) when analyzing potential building collapse
• Ensure, when feasible, that fire fighters should respond together, in one emergency vehicle, as a crewAdditionally, municipalities should consider
• Establishing and maintaining regional mutual-aid radio channels to coordinate and communicate activities involving units from multiple jurisdictions