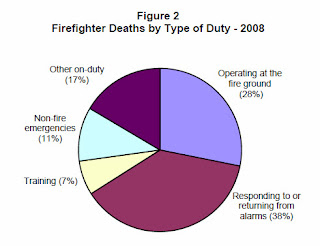 This includes a single incident which resulted in nine deaths. Stress, exertion, and other medical-related issues, which usually result in heart attacks or other sudden cardiac events, continued to account for the largest number of fatalities. Of the 41 exertion- or stress-related fatalities in 2008, 36 were classified as sudden cardiac deaths.