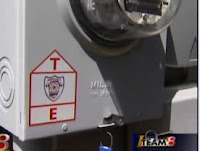 The news release states that; the use of this type of lumber in building construction presents a great danger to firefighting personnel when those structures are involved in fire conditions. By design, the Engineered Lumber in floor and roof assemblies will collapse, without warning, after being exposed to heat or flame contact for a very short period of time.
Because of the inherent danger firefighters must face while operating within these buildings, an Engineered Lumber Identification Program (ELIP) has been instituted to alert personnel of the danger prior to beginning fire suppression operations.

The Engineered Lumber Identification Program is intended to alert the members of the Greencastle Fire Department with pertinent pre-plan information before firefighting forces are committed to an interior attack. The sticker is unobtrusive and is placed directly on a meter box, for example, and alerts the FD if either the floor joists and/or the trusses are made of and Engineered Lumber System and materials. The fire officers are already checking the utility boxes on all fires as part of their initial size-up. The ELIP shall be an ongoing program applied to all residential & commercial buildings inspected by the Greencastle Fire Department.

This is another great example how local level insights, actions and legislation can go a long way in supporting fire service operational challanges as they relate to building construction systems, methodologies and materials. Remember, We can certainly work diligently AND cooperativley with local government officials to enhance incident operations and make our jobs safety, one step at a time….

For additonal information on other efforts that have been instituted nationally in other jurisdictions, check out a previous posting of mine on Truss Systems Placards For Firefighter Safety from Across the United States, HERE. It will provide you with a number of examples and links of different placarding and signage systems across the United States.

http://www.blogger.com/img/videoplayer.swf?videoUrl=http%3A%2F%2Fvp.video.google.com%2Fvideodownload%3Fversion%3D0%26secureurl%3DqAAAAHfApvOOOB_WlESfHfM9b00EaB5iqTOgDk0j1naLLWLm1Zzi26PadOk4bizFlnXp0gjGbZcarsat7UvD3HaFsuw-2vaDRU4jvB-4bl6CShoRiGIXXgktu6oKRd9LPzue3kQ9IEI7QLcubbLE4uzHggz13WUmC2PVdgWMHuNfTs8S3FlAiJD61LtBEJFsu73V3exjvS8UQyGrwegQ0F6pNATji_BLUNlbkitmwbdJGs3E%26sigh%3Dt1M9yKhymImXDY5PA7jjnj1LFeE%26begin%3D0%26len%3D86400000%26docid%3D0&nogvlm=1&thumbnailUrl=http%3A%2F%2Fvideo.google.com%2FThumbnailServer2%3Fapp%3Dblogger%26contentid%3D70eb3fe5759f7438%26offsetms%3D5000%26itag%3Dw320%26sigh%3Dyo5ryvO2YDc2ybBAiqUIbIIA9Ro&messagesUrl=video.google.com%2FFlashUiStrings.xlb%3Fframe%3Dflashstrings%26hl%3Den
Video On the New Program