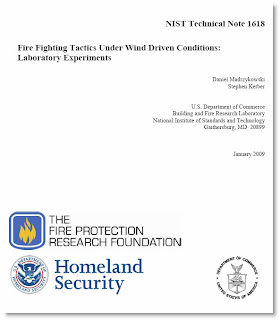 The National Institute of Standards and Technology (NIST) and the Fire Protection Research Foundation (FPRF) with the support of the Department of Homeland Security (DHS)/ Federal Emergency Management Agency (FEMA) Assistance to Firefighters Research and Development Grant Program and the United States Fire Administration (USFA) conducted a series of wind driven fire experiments in a laboratory structure. A copy of this report is available HERE.

The experiments were conducted in the NIST Large Fire Facility in Gaithersburg, Maryland from November 2007 to January 2008. The objective of this study was to improve the safety of firefighters and building occupants by enabling a better understanding of wind driven firefighting tactics, including structural ventilation and suppression.

This was achieved by investigating technical issues that address the teaching of the dynamics of fire phenomena and prediction of fire intensity and growth under wind driven conditions. The data from this research will also help to identify methods and promulgation of improved standard operating guidelines (SOG) for the fire service to enhance firefighter safety, fire ground operations, and use of equipment.

The experiments were conducted in NIST’s Large Fire Facility in order to provide the best levels of control on the experiments and have the capability of making heat release rate and high quality gas concentration measurements which would be difficult and cost prohibitive to make in an acquired structure. The experiments were designed to expose a public corridor area to a wind driven, post-flashover apartment fire. The door from the apartment to the corridor was open for each of the experiments. The conditions in the corridor were of critical importance because that is the portion of the building that firefighters would use to approach the fire apartment or that occupants from an adjoining apartment would use to exit the building.

As implied by the title, the laboratory experiments documented in this report are only one portion of the research needed to analyze the impact of wind on a fire resistive structure fire and demonstrate potential methods (tactics) for improving firefighter safety and effectiveness.

These experiments were conducted in advance of a series of fire experiments that were performed in a 7 story building on Governors Island in New York City in February 2008. The New York City experiments conducted by NIST in partnership with the Fire Department of New York City and Polytechnic University were also done with the support of a DHS/ FEMA Assistance to Firefighters Research and Development Grant Program and the USFA.

These experiments demonstrated the thermal conditions that can be generated by a “simple room and contents” fire and how these conditions can be extended along a flow path within a structure when a wind condition and an open vent are present. Two potential tactics which could be implemented from either the floor above the fire in the case of a WCD or from the floor below the fire in the case of the external water application were demonstrated to be effective in reducing the thermal hazard in the corridor.

Other data and observations, such as the fire pulsing out of the window opening against the wind, can provide valuable information to the fire service for hazard recognition purposes.

According to NIST, further research in an actual building is required to fully understand the ability of firefighters to implement these tactics, to examine the thermal condition through the structure such as in stairways, and to examine the interaction of these tactics with building ventilation strategies both natural and with positive pressure ventilation. The report also includes a series of heat release rate experiments which were used to characterize the fuel packages for these and future experiments.