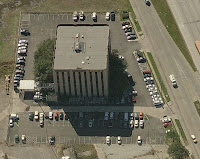 In case some of you missed the excellent video that depicts the operations of the Houston FD at a Four Alarm Fire in an office building on March 28, 2007 HERES some information.

The fire resulted in three civilian fatalities with three firefigher injuries. There was a significant mayday and RIT operation that evolved during the incident that was produced into a DVD with scene video and radio communications. The DVD was produced by the bravestonline.com

This is a must see video. Get the HFD After Action Report of the fire at 9343 North Loop East, which makes understanding the scope and magnitude of the event clearer HERE. While battling the high-rise fire, Capt. Joel Eric Abbt, assigned to Station 8, was on the fifth floor of the building searching for victims when he ran into trouble. His first mayday call was all but drowned out by the chatter of other firefighters engaged in rescues. The DVD of the 27-minute search and the captain’s frantic calls for help is now available though a website, The Bravest Online as tagged above.

The image above is the office building before the fire.