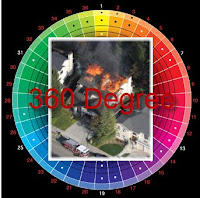 360 Degrees of Separation. The fireground often has competing or conflicting incident priorities, demands or distractions before a complete appreciation of all mission critical or essential information and data has been obtained. The effective assessment of the incident scene is much more than the three-sided size-up methodology of past fireground practices. In fact the term size-up doesn’t align with the newest directions in firefighter safety and incident command management.

The 360 degree assessment has become the generally accepted standard from which risk assessment is performed and incident action plans derived. The fact that many LODD case studies and reports repeatedly indicate the lack of an effective 360 degree assessment of the incident scene where structural fire engagement is being initiated was a contributing factor or may have contributed to a different incident outcome.

Think about the effectiveness and value that the 360 ◦ Degree assessment brings to the development of an effective and valid incident action plan and the tactics that are driven by those identified and assumed assessment indicators.The question is: Are you conducting a 360 upon arrival, and if not WHY?

Remember: All command and supervisory personal and operating companies must be able to recognize and appreciate the risks which are present at an incident in order to carry out an effective dynamic risk assessment. The 360 Degree assessment is a mission critical element for effective and safety incident operations.

Don’t for a moment think, “it takes too long to perform” or that you don’t have time to conduct, especially from a company officer perspective when you’re deploying and initiating tactical assignments. That extra minute to conduct a “three-sixty” may make all the difference in the world…..There may be three hundred and sixty degrees of safety margin that separate you and your company between injury or death….think about it.